We are pleased to share a report on the Mahler & LeWitt Studios summer 2022 residency session. Across the six weeks, we hosted five residents and organised programming for the Festival dei Due Mondi, including a film series with Michael Blackwood Productions and a book launch with Marea Art Project.

In collaboration with the Ethical Fashion Initiative and supported by funds from the Premio Carla Fendi (awarded to Marina Mahler and Carol LeWitt in 2021 for their services to culture in Spoleto), we were joined by textile designer and dyer Maïté Oucéni (b.1993, Sèvres, France). During her residency Maïté studied with Alessandro Butta, an expert in natural dying techniques based in the nearby Marche. It was with great sadness that, during the session, we learnt of Alessandro’s death in an accident on his farm. He will be dearly missed by the community of artists and makers who he inspired, with whom he generously shared his time and knowledge.

Maïté’s work, which includes experimental design and sculpture as well as the development of functional objects, combines traditional and contemporary eco-sustainable techniques — focussing, in particular, on natural dyeing methods using plants and minerals. To find out more about her residency click here>> 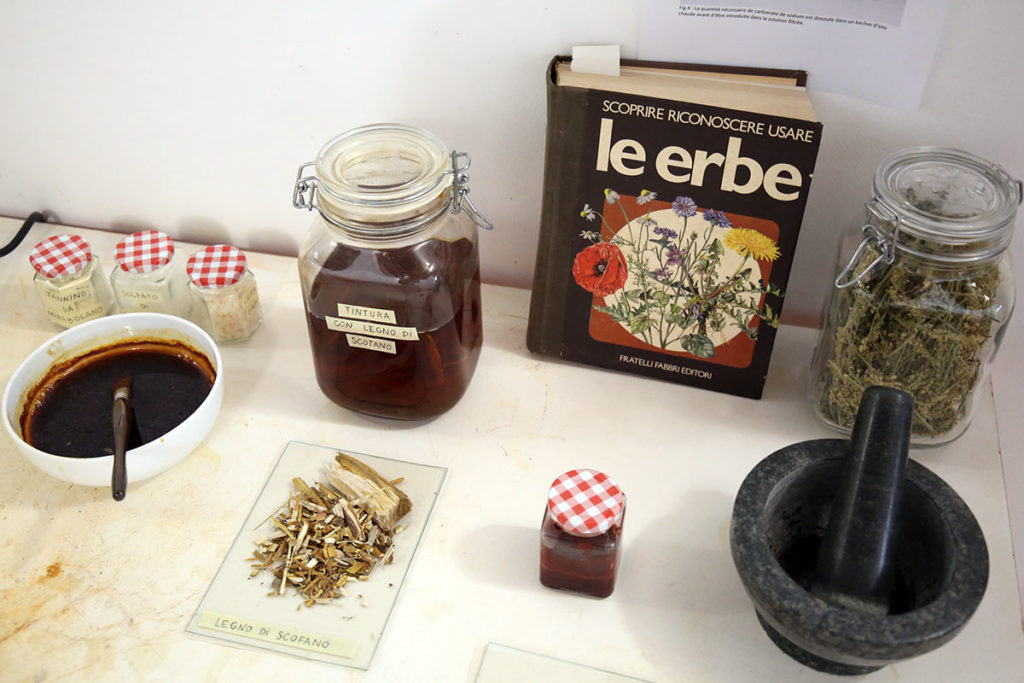 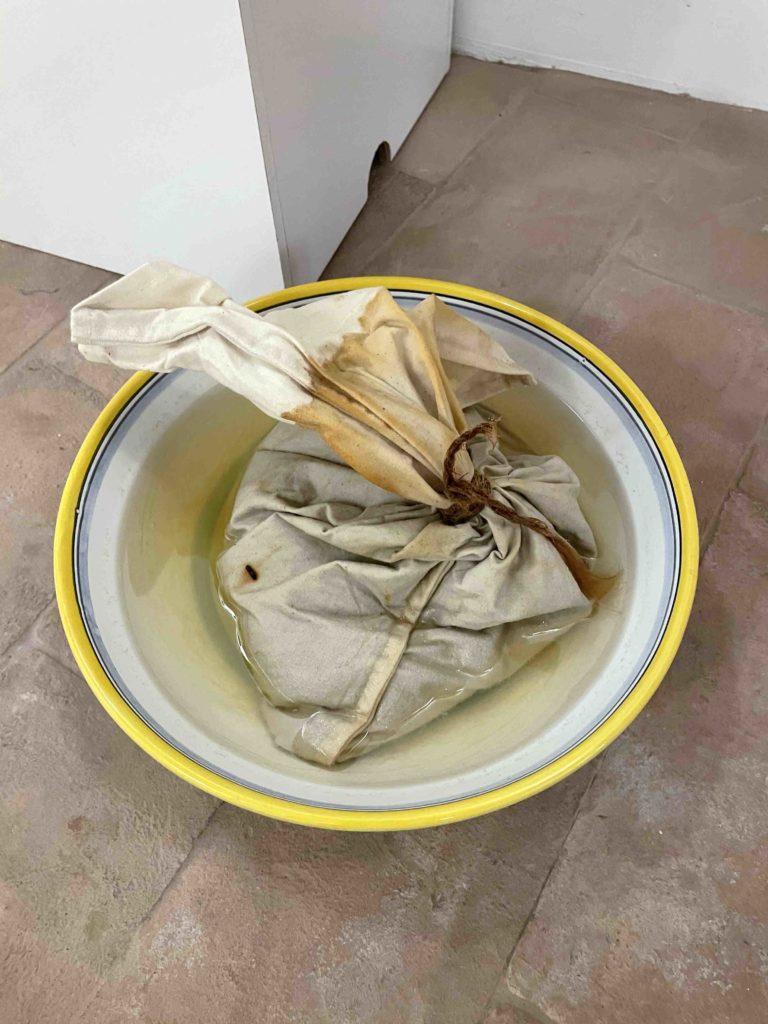 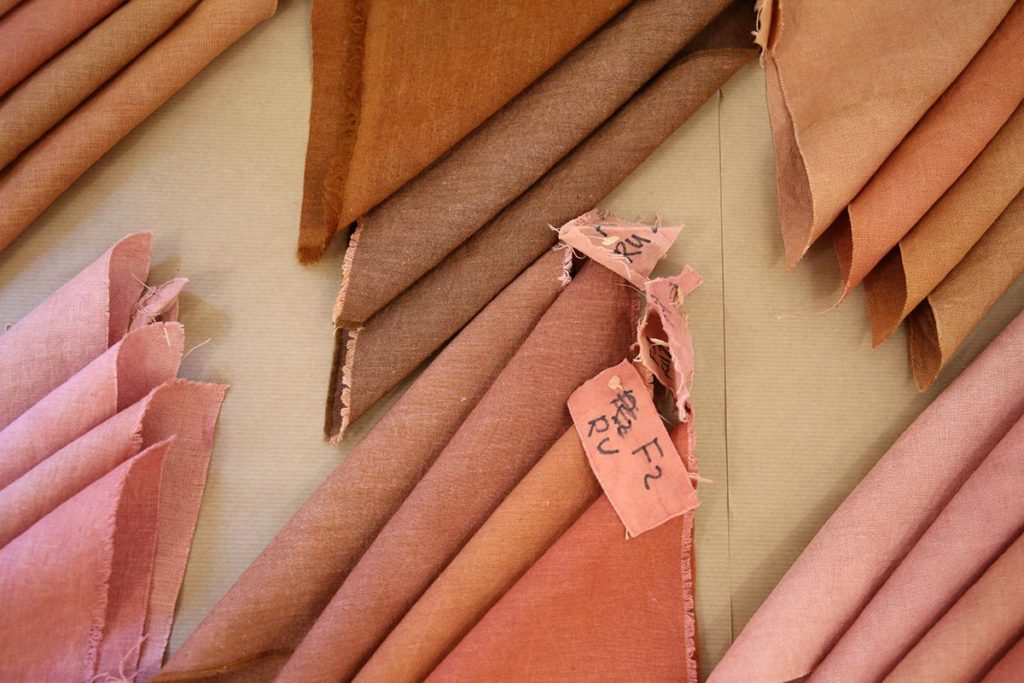 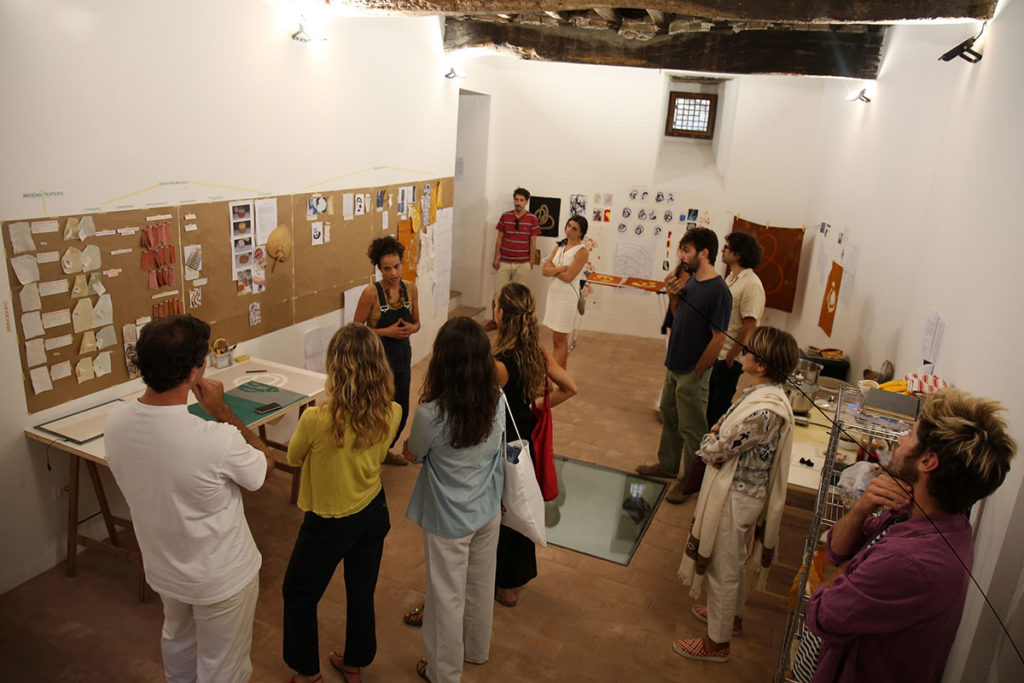 Stephanie Wisowaty (b.1994, New York, USA) also joined the session. She is a PhD candidate in History of Art at Yale University. Her dissertation, supervised by Prof. Jacqueline Jung and Dr. Laurence Kanter, examines the materiality, mobility and mediatory powers of double-sided painted processional crosses in late medieval central Italy. The project investigates how such objects invited a multisensorial and imaginative devotional process, and how they participated in and contributed to the artistic innovations and identity-building practices of burgeoning religious communities in late medieval central Italy.

Three of the crosses at the centre of Stephanie’s research are held in the collection of the Museo Nazionale del Ducato di Spoleto. Assisted by the museum Director, Paola Mercurelli Salari, Stephanie was able to study these crosses in person for the first time. She also made visits to the Galleria Nazionale dell’Umbria in Perugia, which holds two important examples, and she studied crosses in the reliquaries of Basilica di Santa Chiara in Assisi and at the Santuario di Santa Chiara della Croce in Montefalco. During her stay, she guided her co-residents on a visit to the frescoes in the Basilica of San Francesco in Assisi. To read more about Stephanie’s residency click here>>

Marianne Brooker (b.1991, Orsett, UK) was awarded the essay prize this year for her proposal Intervals, an essay about choice, interdependence and end-of-life care. Blending memoir, polemic and feminist philosophy in order to transform grief into a resource for politics, Intervals explores the space between proximity and complicity, charting the author’s care for her mother as she refused food and water at the end of her life, determined to end her suffering from Primary Progressive Multiple Sclerosis. For our Open Studios, Marianne made a pamphlet titled ‘Inventive Forms of Love’, an extract from the forthcoming book, developed during her residency in Spoleto. To read more about the essay prize and Marianne’s residency click here>> 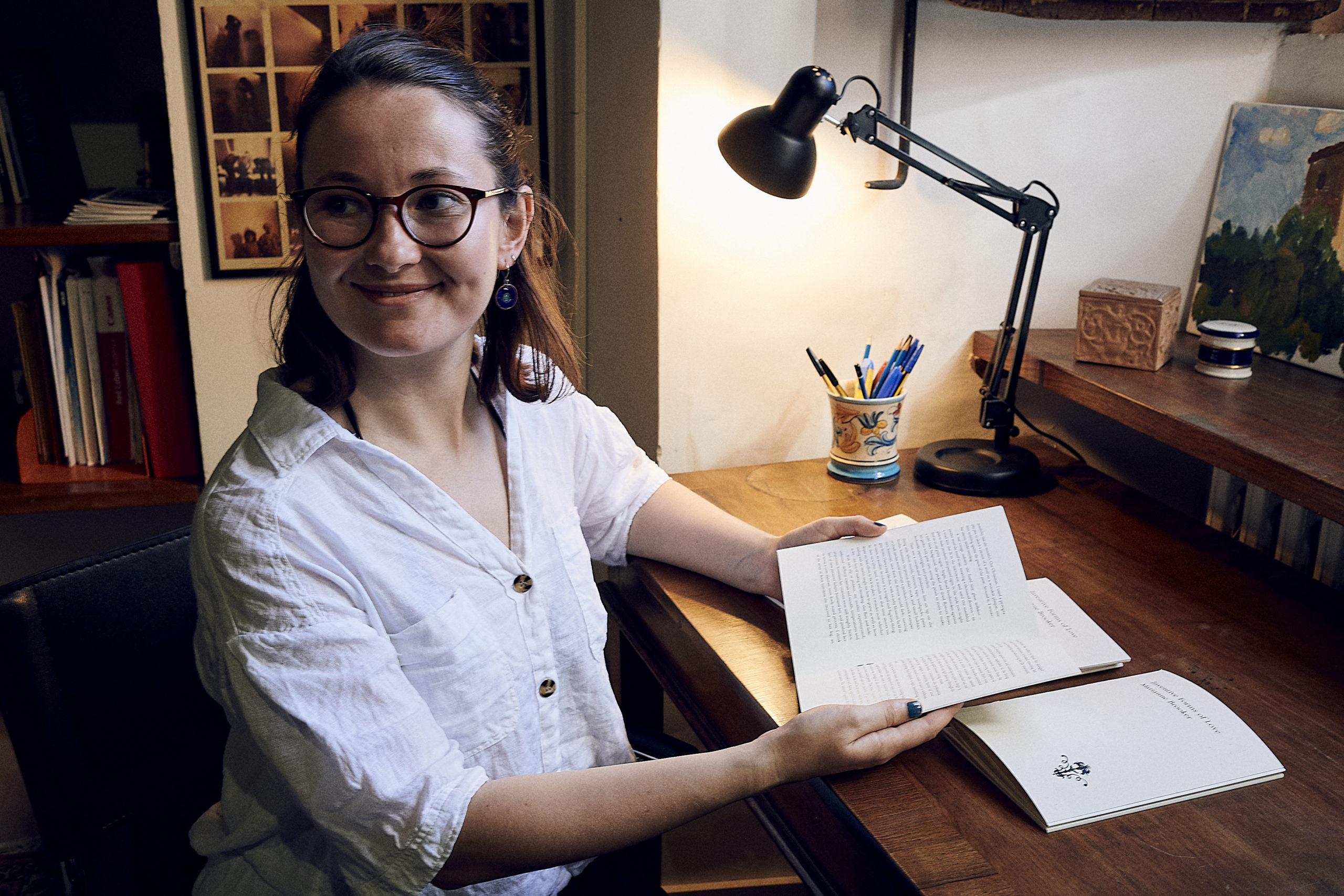 Photographer Mary Manning (b. 1972, Alton, Illinois) models a method of close looking in carefully arranged juxtapositions of 35mm analog prints. They described their residency saying, “One of my goals in Spoleto was to make a book that will become a long rambling poem of work from the last decade. A freeing up from familiar images carried out in the midst of adding to the overall assemblage – to build a tableaux that will show my preoccupation with looking and collecting.” To read more about Mary’s work click here>>

Phillip John Velasco Gabriel (b. 1983, Jacksonville, US) is a Filipino American, New York City based painter. Describing the paintings he made in Spoleto he said; “The work explores my interest in motifs which recur through art history. These can be identified in these paintings as both bodily (hands) and decorative (abstraction/color-field). Specifically, I have been thinking about the influence Umbria’s medieval and early renaissance frescoes had on Sol LeWitt’s wall drawings – their application, color palette, and so forth. It’s interesting to consider how these two seemingly disparate moments in time informed each other and how they can continue to inform artists today.” To read more about Phillip’s work click here>> 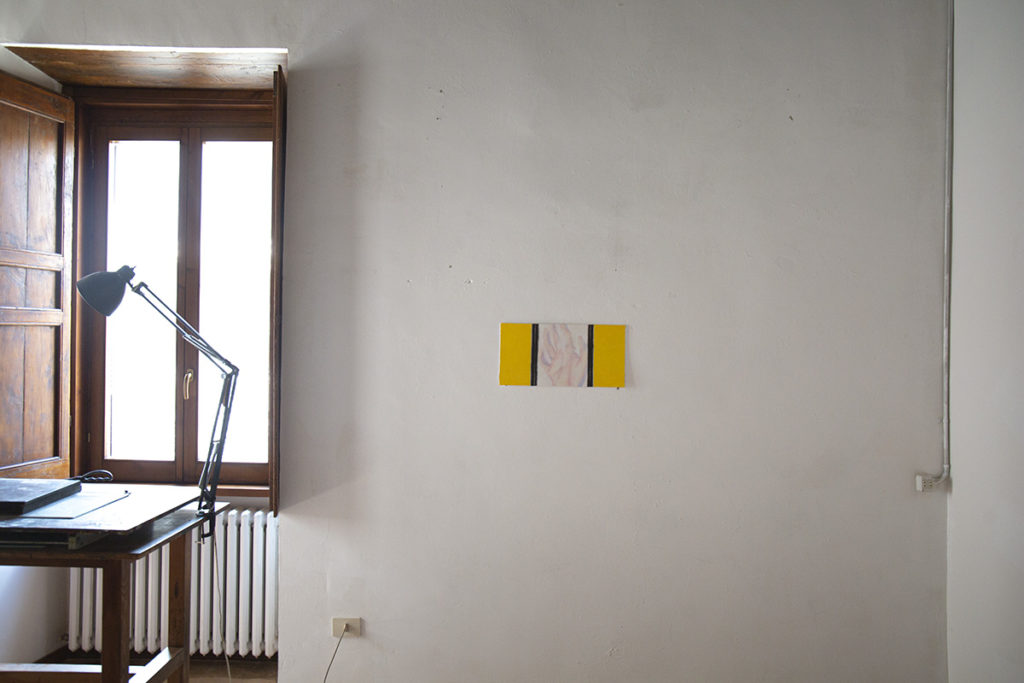 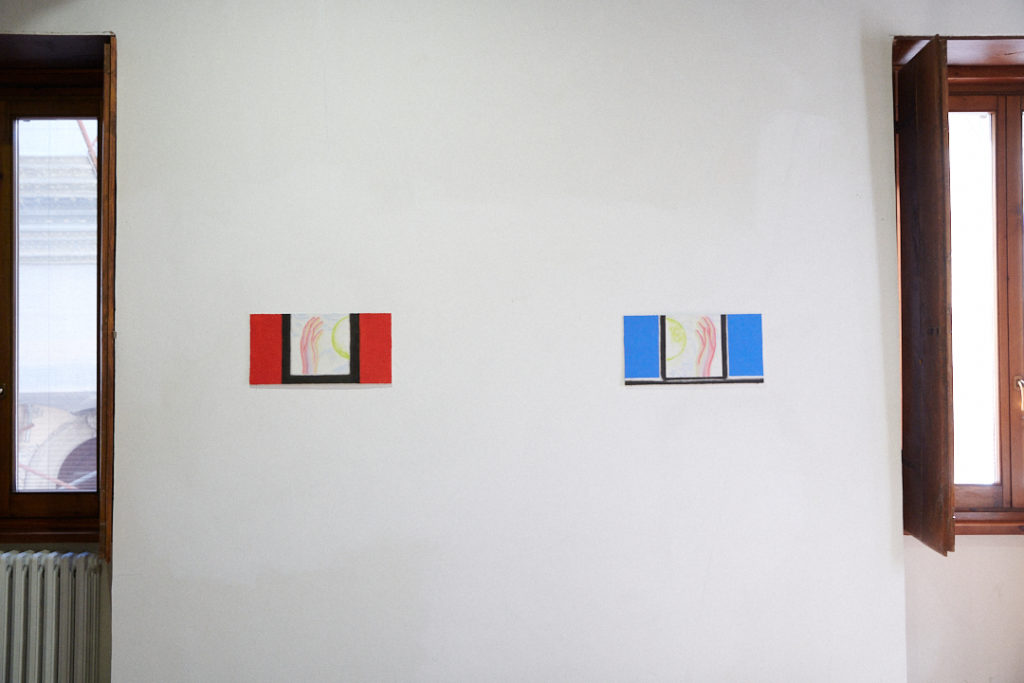 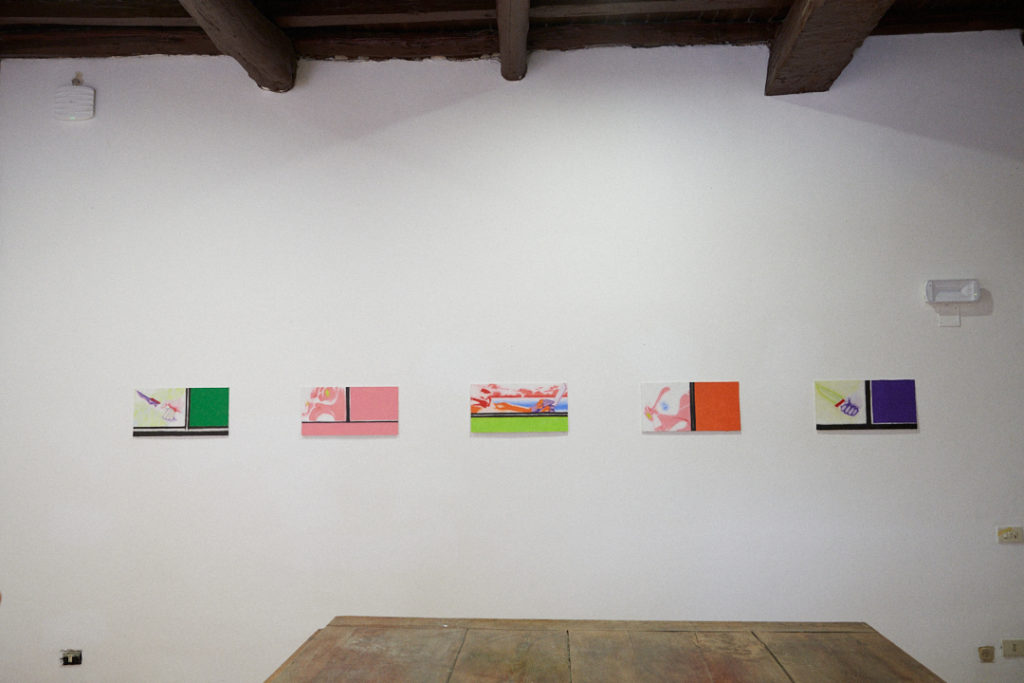 Under the new directorship of Monique Veaute, the Festival dei Due Mondi has been re-energised. Our residents enjoyed attending performances, exhibitions and events – Pina Bausch, Trisha Brown Dance Company and Anne Teresa De Keersmaeker were among the dance offerings alone. Supported by Bloomberg Philanthropies, our main contribution to the Festival program was ‘Artists on Camera: Michael Blackwood Productions’.

Michael Blackwood is one of the most established and prolific art documentary makers and has produced over 150 films from the 1960s to now, chronicling the stories of the most impactful creative minds of their day. One of his early films, Spoleto 1967, documented the 10th anniversary of the Spoleto Festival. Michael has enjoyed a long creative relationship with the town, meeting artists here and generating new filming opportunities. The series was the first review of his work with a focus on the visual and performing arts; 15 films were presented across four venues, including Sala Pegasus, a cinema in a 12th century church, and the Collicola Arena, an outdoor cinema screen in the courtyard of the Palazzo Collicola Arti Visive, the modern art gallery of Spoleto. For more information and to see the full schedule click here>>

During the Festival, former filmmaker and artist in residence Alessandro Cicoria presented his experimental art documentary STUDIOLI TV in the Palazzo Collicola cinema. Afterwards, in conversation with Luca Lo Pinto (Director, MACRO), he also shared rushes from a new film shot in Spoleto during his residency. At our Open Studios event Alessandro presented his recent acoustic drawings and photographic work in the Torre Bonomo. To read more about Alessandro’s work click here>>

During our Festival Open Studios we hosted the launch of an artists’ book by Giulia Crispiani and Michele Bertolino, published by Marea Art Project to conclude a residency in the LeWitt family home in Praiano on the Amalfi coast. Stefano Collicelli, Director of the Centro per l’arte contemporanea Luigi Pecci di Prato, presented the book with Bertolino. Imma Tralli from Marea Art Project is pictured  here on the left. Read more>>

We thank you for your enthusiasm and support and will keep you updated as the program continues this year. Our next session, which sees the launch of the new ‘Materia’ program, runs from 21 August – 18 September. We will send further details in a Newsletter soon. Do let us know if you have any plans to pass through Umbria, we would love to see you. Otherwise, we look forward to being in touch again soon.

Our best wishes and thanks,
Eva LeWitt and Guy Robertson