Ranura Edirisinghe
In partnership with the Art for the Environment Programme (AER), University of the Arts, London 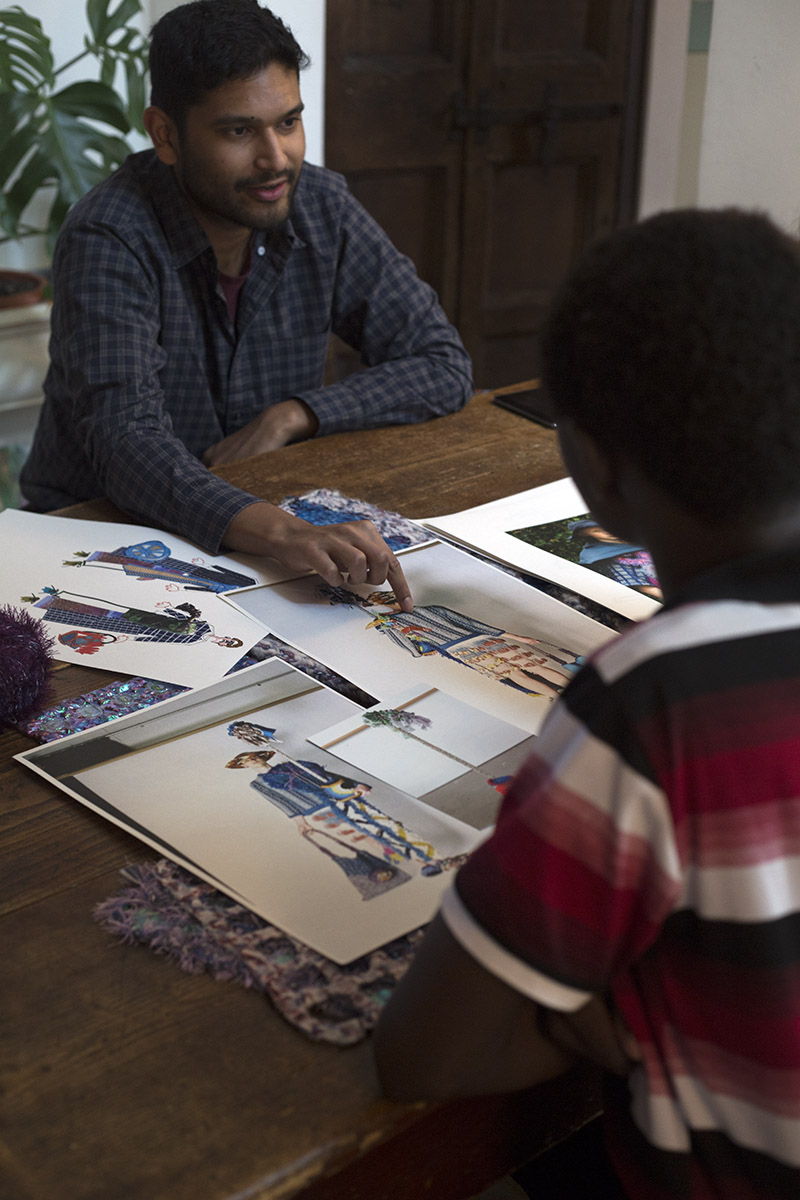 Ranura Edirisinghe’s work sits between art and fashion. Using found, donated and repurposed objects and materials, he has developed a textile-based practice that revitalises craft with improvisation and luxury with junk. The resulting artefacts aim to challenge and inspire in our era of over production.

During his residency Ranura explored the traditions of textile manufacturing in Umbria and made a body of new work which he presented in an Open Studios exhibition. The text which follows, written by Ranura, offers a vivid account of his productive month.

The AER programme was set up to explore concerns that define the twenty-first century—biodiversity, environmental sustainability, social economy, human rights—and through artistic practice, to envision a world of tomorrow. It was founded by internationally acclaimed artist Lucy Orta (UAL Chair of Art for the Environment – Centre for Sustainable Fashion) in 2015. Through personal research and studio production time the residency provides a platform for creative individuals working across various disciplines, to imagine and create work that can make an impact on how we interact with the environment and each other.

Working in Spoleto gave me a chance to imagine tangible, sustainable ways of repurposing old textiles in a contemporary fashion context. I visited many manufacturers, second-hand shops and craftspeople, sourcing discarded and unwanted materials from the people I met. A man called Gregorio is the owner of the ‘Mercato Usato’ in Spoleto: his shop has piles of old textiles—curtains, tablecloths, bedsheets, blankets. I was fascinated by their previous lives; who they belonged to and how they ended up in his hands. I wanted to repurpose these textiles into knitwear and then apply treatments to that knitwear to create different effects.

My visits to the nearby towns of Assisi and Todi offered a fascinating insight into the art history of the area. The Basilica of Saint Francis is esteemed for its brilliant use of the colour blue, which was pioneering at the time and would later inspire Yves Klein, who visited in the 1950s. I was struck by the intensity and the shades of the the blue and it informed the textiles I created. 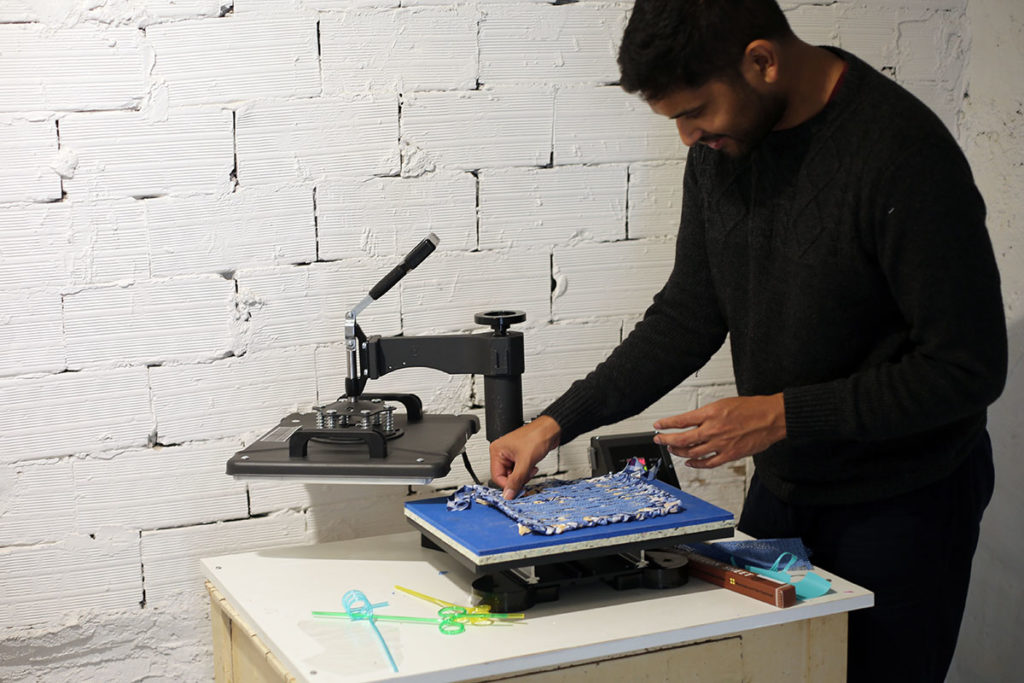 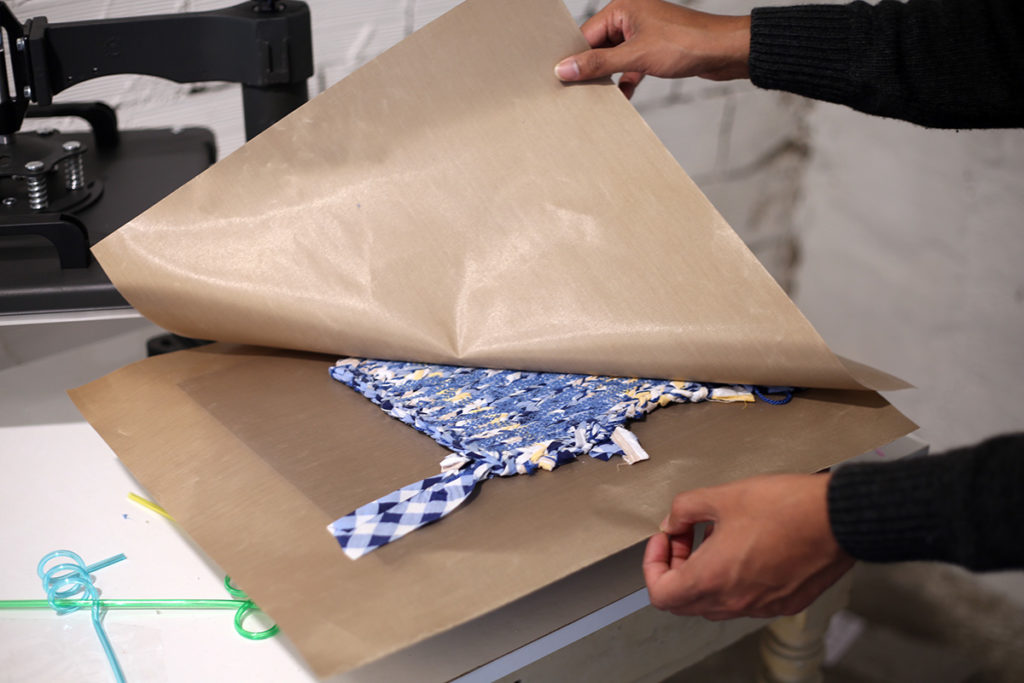 For our Open Studios event at the end of the residency I scanned the samples I had been working on and presented them as photographs, in varying sizes and arrangements. I didn’t want to show the actual knitwear samples. It was important to remove any sense of ‘making’ or ‘craftiness’ in them. I wanted to create a distance between what I had made and what was actually presented: to elevate the samples to being something more impactful—filled with the value of their production time, whilst at the same time being idealised versions, or imagined ideas of themselves. By reducing the textiles to flat photographs, I also created a sense of ambiguity: you couldn’t touch and hold each piece, or clearly understand what it was made of or how it was made. It left each sample unable to completely communicate the tactility of its surface. This was a deliberate decision that aimed to prompt questions about the place of craft in art and fashion. 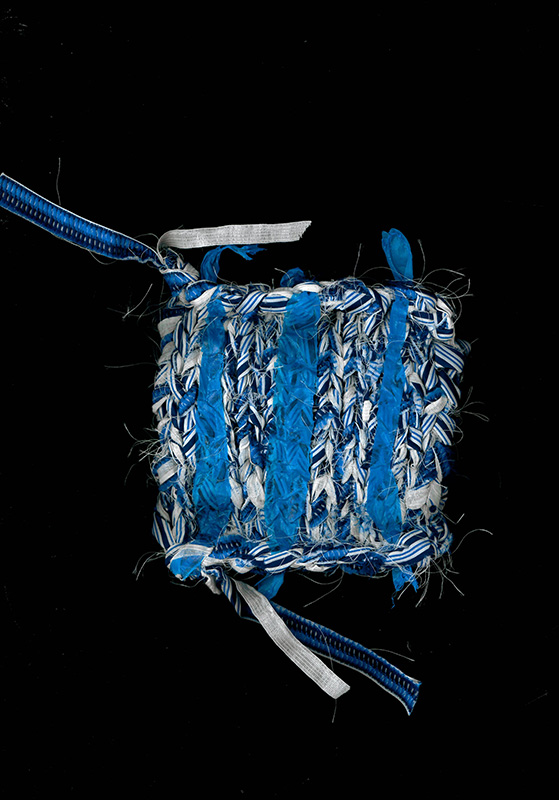 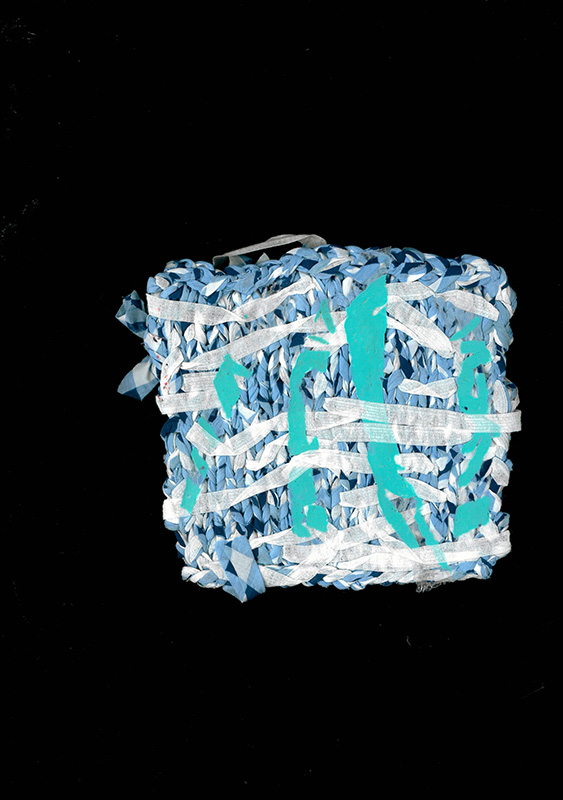 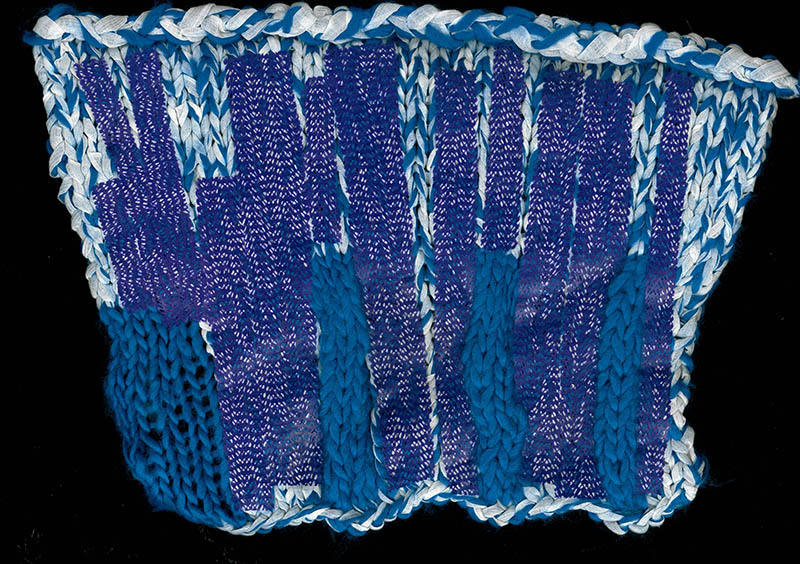 Umbria has a rich history of knitwear and cashmere production. I spent time visiting textile-based practitioners and factories including the Brozzetti, a weaving workshop and museum located in the gothic church of San Francesco Delle Donne in Perugia. Passed down through four generations, the weaving tradition is continued by Marta and her apprentice. Their workshop makes fabrics which are similar to traditional, medieval Perugian designs. They use nineteenth- century jacquard frames to carry out the hand weaving. The process entails using metal punch cards, which are placed on a rotating cylinder: each hole corresponds to the pattern and fabric design—essentially this is the first kind of computer! Designs of flowers, bees, leaves and mythological animals, intertwined with the traditional blue and white colours of Perugian tablecloths are woven in linen, cotton, silk and cashmere. Textiles from scenes painted by artists from Giotto to Da Vinci are also adapted and re-worked to be made into woven designs. 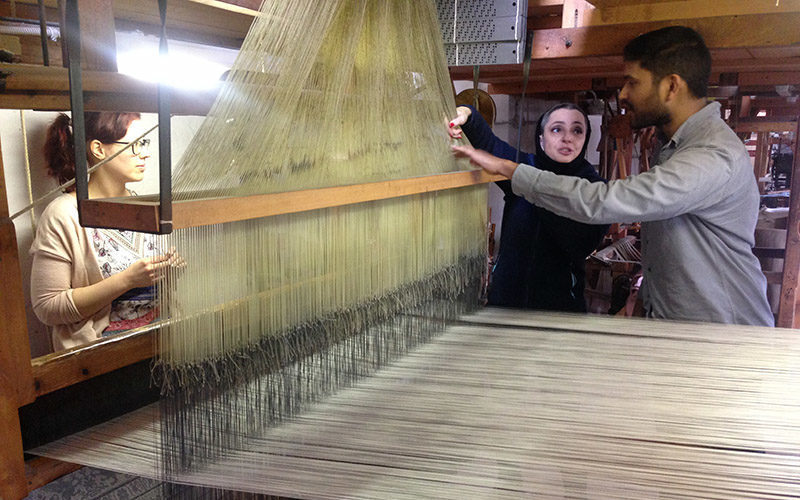 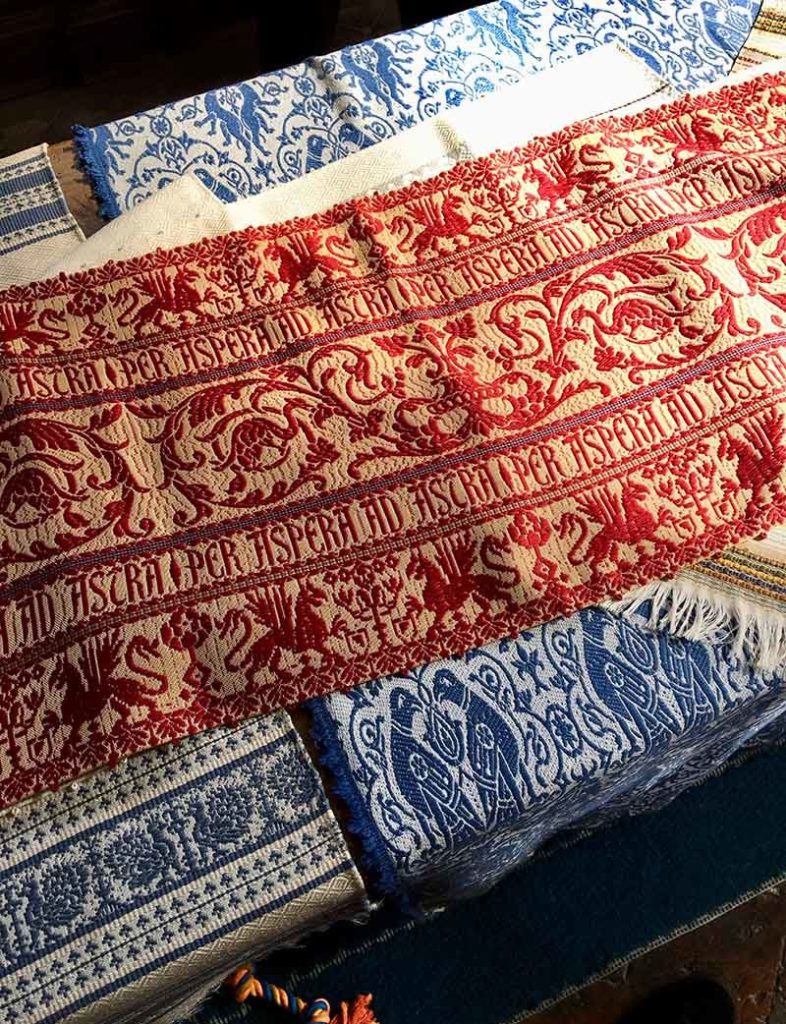 The Italian fashion industry certainly has the power to support these artisans, but the high taxation rate in Italy gives the business very little room to expand and they need more support. The workshop mainly relies on bespoke commissions but it produces a small number of textiles to be sold to tourists at accessible prices. As Marta explained more about the business and the troubles that workshops like hers face, I thought about how the fashion house Chanel has acquired a group of similar workshops in Paris and throughout France: small scale ateliers known as the savoire-faire, specialising in traditional, specialised techniques such as the feather work crafted by Lemarié (established in 1880) or pleating and embroidery by Les Ateliers Lognon. The acquisition by Chanel allows these ateliers to continue without financial worry and to operate at a loss as the costs are absorbed by the label. Perhaps Italy should have a similar network.

I visited a knitwear factory near Spoleto which has specialised in fine gauge knitwear since the 1950s and is extremely committed to sustainable practices. They produce knitwear for luxury fashion brands such as Celine and Victoria Beckham. The majority of the factory is run on solar power. The owner of the factory explained how green credentials are becoming more important for luxury fashion brands. Conglomerates such as Kering, who own brands such as Gucci, Alexander McQueen and Saint Laurent, are demanding better and more stringent green practices. Factories like this one are rising to the challenge on a scale that is not niche and can be tangibly applied to large-scale, high- end manufacturing processes. For example, the factory employs a rain water system to wash knitwear and uses natural products such as citric acid and vinegar in the washing process instead of chemicals. The fact that this was being done in a high-grade factory was extraordinary. To see simple techniques, like those that I have used for my own university work, used on an industrial scale, was extremely motivating.

During my residency I had the chance to attend Salone de Mobile, the major design fair in Milan. I had wanted to visit the fair for a long time and was very grateful for the opportunity, which the Mahler & LeWitt Studios facilitated. I wanted to see the innovations in sustainable material which are presented during the event. An installation by the architect Arthur Mamou-Mani, for the fashion brand COS, was particularly striking: its location in the 16th century Palazzo Isimbardi contrasted well with the geometric, 3D-printed, compostable bio- plastic sculptures. Also, Amsterdam-based design studio Forma Fantasma’s collection of tiles made with a glaze of volcanic ash from Mt. Etna in Sicily showcased the potential of a rarely used natural material. 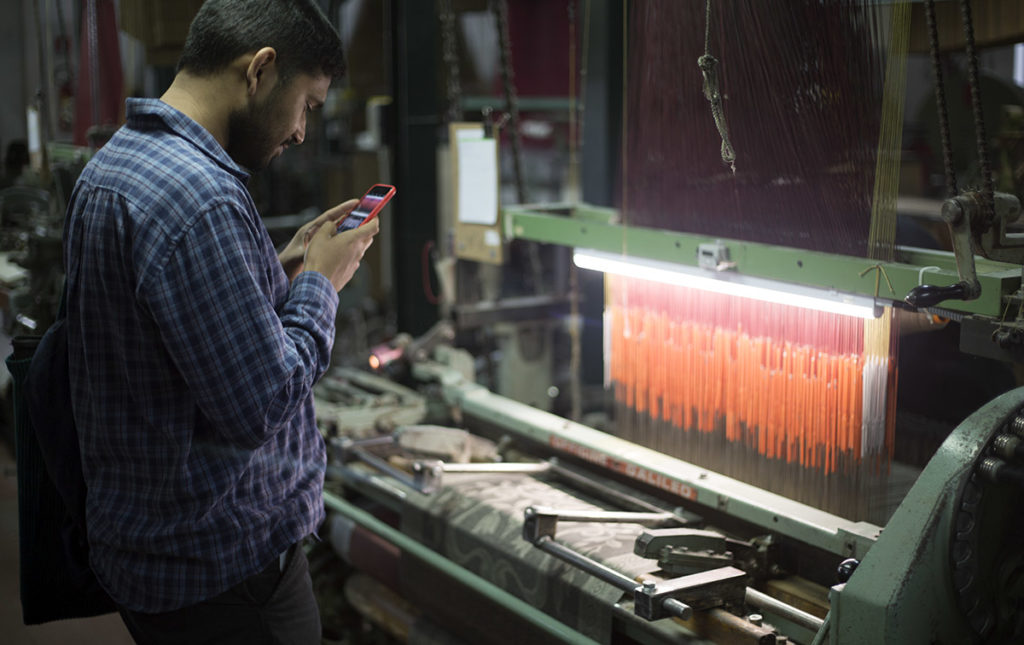 I also visited a large-scale weaving specialist Pardi. Once again a family business now owned by the children of the founder. For over sixty years the Pardi family have been specialising in the weaving of linens, tablecloths, towels and other homeware. I was shown around by Augusta Pardi, whose father and uncles founded the company in 1949. I had never seen these kind of industrial scale weaving looms, the sound of them all operating inside the factory was intense – such a contrast from the Borzzetti workshop. These industrial machines had a beauty of their own and some could hold up to twenty thousand strands of yarn for designs.

During my residency I had the chance to attend Salone de Mobile, the major design fair in Milan. I had wanted to visit the fair for a long time and was very grateful for the opportunity, which the Mahler & LeWitt Studios facilitated. I wanted to see the innovations in sustainable material presented during the event. An installation by the architect Arthur Mamou-Mani, for the fashion brand COS, was particularly striking: its location in the 16th century Palazzo Isimbardi contrasted well with the geometric, 3D-printed, compostable bio-plastic sculptures. Also, London based design studio Forma-fantasma’s collection of tiles made with a glaze of volcanic ash from Mt. Etna in Sicily showcased the potential of a rarely used natural material.

Finally, visits to the nearby towns of Assisi and Todi were a great insight into learning more about the art history of the local area. The Basilica of Saint Francis is regarded for its use of blue which was pioneering at the time and would later inspire Yves Klein, who had visited in the 50s. I was really stuck by the intensity and the shades of the the blue used and it really informed the textiles I created during my residency. 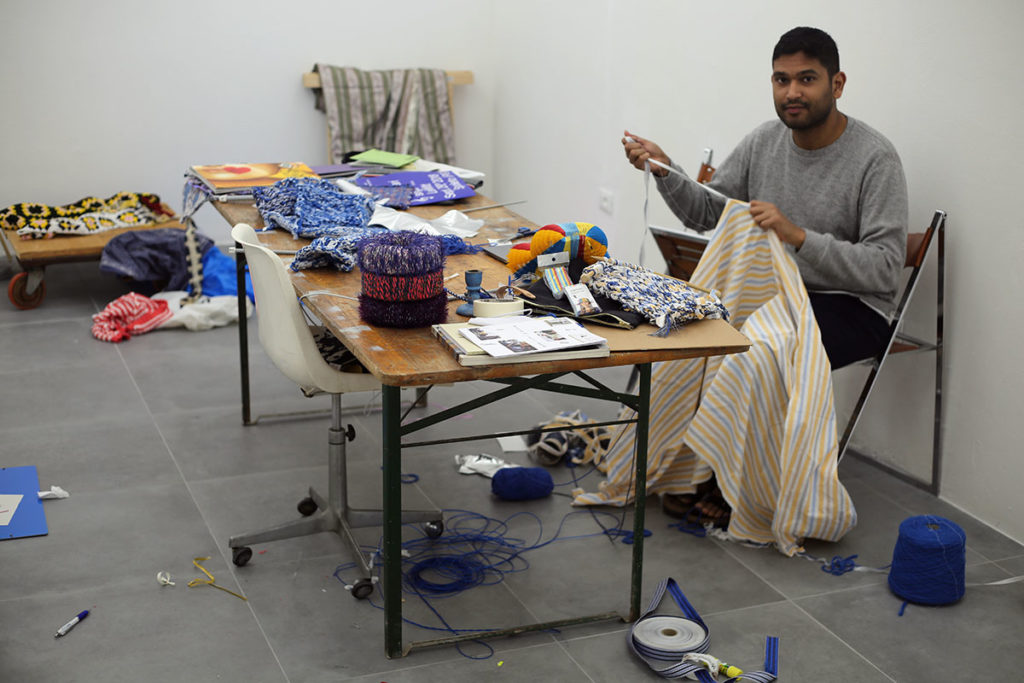 Ranura’s installation for the group exhibition Common Ground (Barbican Centre, London, 2018) was a collection of over 100 yarn discs, crocheted by craftspeople in Sri Lanka. The discs were installed around his textile sculptures and were gifted to visitors throughout the duration of the exhibition. Ranura is interested in the practice and preservation of craft and the intergenerational relationships it has served in textile dying and handicraft, whilst examining responses to issues of sustainability and the social economy. He studied fashion at Central St Martins, London (BA 2014-2018, MA 2019-2020). He was the winner of the Samsung Fashion Design Fund Award in 2018 and his work has been reviewed by Hunger Magazine and WWD.