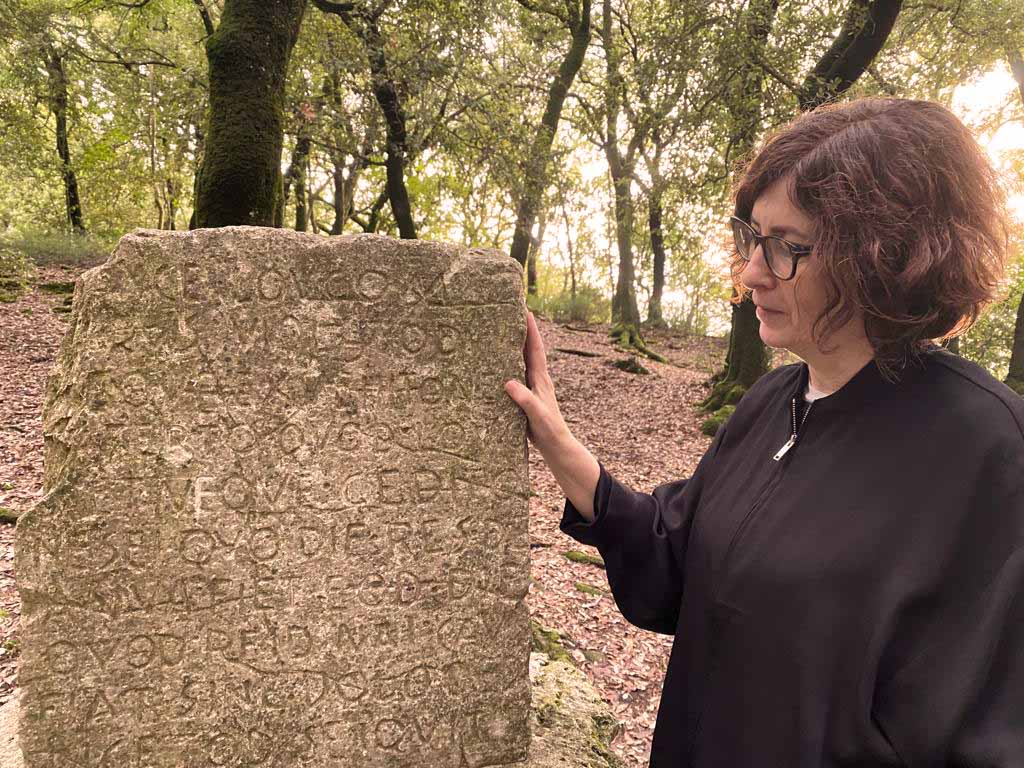 Artist film-maker Grace Weir (pictured here in the Sacro Bosco of Monteluco alongside the “Lex Spoletina”, a 3rd century BC tablet declaring the wood as sacred and designating it a conservation area) participated in our Artists’ Books Program in 2018. She returned to Spoleto in 2021 to start work on a new film, supported by the Arts Council of Ireland and Alessandra Bonomo, which takes the Eremo Santa Maria Maddalena as its starting point. The Eremo is an historic convent on Monteluco, the hillside overlooking Spoleto, and became a site of fervent artistic activity when it was bought by Lorenzo and Marilena Bonomo. In 1971 Marilena, mother of Alessandra and a pioneering gallerist, invited Sol LeWitt to stay in the house with Mel Bochner and while there, they created a number of unique artworks directly on its walls.

Grace’s output ranges from film and installation to experimental videos, lecture-performances and web projects. These are concerned with the nature of ideas and the ways in which thinking is materialised, so that the work often refers to the act of its own making and the mediums in which it is made. She has a particular interest in scientific phenomena and the ways we construct, rationalise and experience time, and her work is informed by conversations and experiments with scientists, philosophers and practitioners from other disciplines. Weir was Artist-in-Residence in the School of Physics, Trinity College Dublin, 2013-15. She represented Ireland at the 49th International Venice Biennale and has exhibited widely nationally and internationally. Recent solo exhibitions include the Irish Museum of Modern Art in 2016 and Laure Genillard London in 2017. Grace provides a synopsis of her film:

‘For every line, a point not on it’ (working title)

This project is to produce a new film to be shot at a mountain location in Monteluco, Italy, that is composed of a sequence of trajectories, both topographical and artistic, that connect different theories of vision and techniques of image formation from the Renaissance practices of Michelangelo to the conceptual practices of Sol LeWitt and others. Based on the connection between different artistic periods that have occurred at the same mountain location, the film traces out contours both temporal and spatial, travelling physically upwards to a wood on the mountain top and simultaneously backwards in time, from a very unique house and artistic retreat, owned by Alessandra Bonomo, further below on the hill.