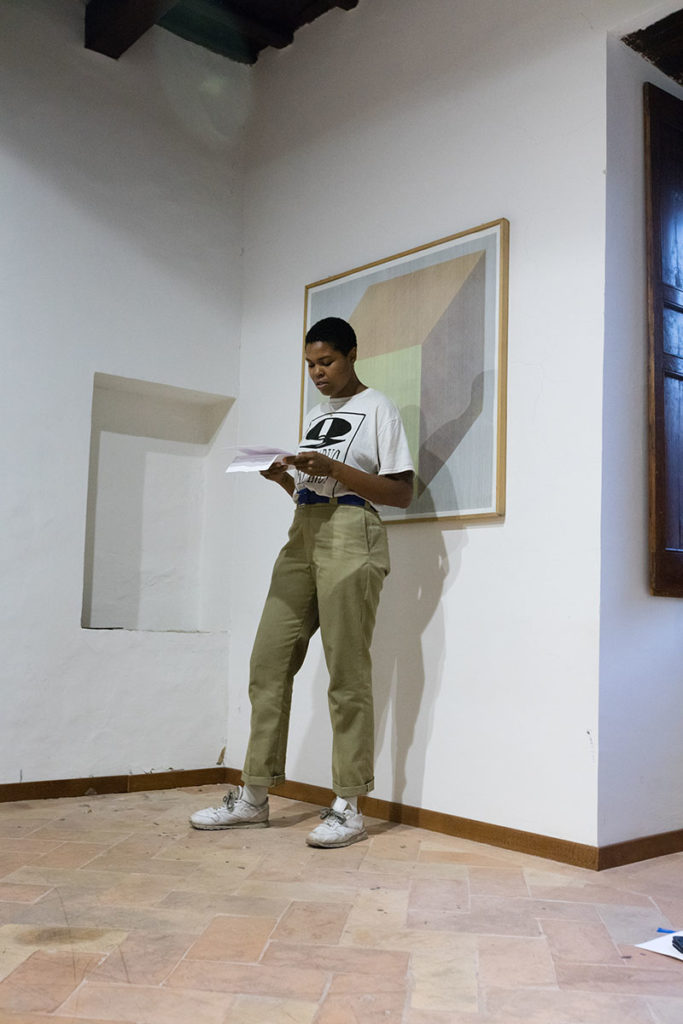 Diamond Stingily found respite in Spoleto having recently opened her first institutional solo-exhibition at ICA Miami. She spent time writing, which she shared with us at an Open Studios event, and making a series of ‘hergott’ dolls for people she met during the residency: in her work, Diamond uses these faceless avatars, based on Amish dolls, but with brown fabric for skin, to address issues surrounding black identity, oppression and childhood. She photographed and filmed the dolls, posting them on her far-reaching social media network, which she considers an important platform for disseminating her work. The films were also a part of her exhibition at Freedman Fitzpatrick, Paris, which was titled For The People of [__________].

​Diamond Stingily is an artist and poet from Chicago, Illinois, now based in Brooklyn, New York. In a statement about her work Stingily says, “I want to reconstruct the idea of art for people who grew up similar to my social economic background. I don’t believe art should be intimidating or only for the privileged. As a writer and an artist I want to show how an object can tell a story and share an experience. It makes the experience universal and hopefully through this form of vulnerability creates necessary conversations. I want to explore racism, colorism, femininity, surveillance, paranoia and phobias within my community and question ideas of structure.” Read full statement>>

She has incorporated a variety of media in her work, including synthetic hair, children’s dolls, surveillance hardware, baseball bats, wooden doors and chains. As well as personal reflections, often sourced from her own writing, central themes include childhood, memory, surveillance culture and systemic racial injustice in the United States.

She has exhibited twice at the New Museum, NYC, in ‘Trigger: Gender as a Weapon and a Tool’ (2017) and in the Triennial show ‘Songs for Sabotage’ (2018). She has read at Artists Space(NYC, 2017) and at the Serpentine Galleries (London, 2018) for Sondra Perry’s ‘Typhoon Coming On’. Stingily is a published author and hosts a podcast-style radio show on called ‘The Diamond Stingily Show’. Her first solo museum exhibition is held in 2018 at ICA Miami, US.