We are pleased to present our third Artist’s Edition, generously donated to the studios by the artist. All proceeds support our 2018 program. 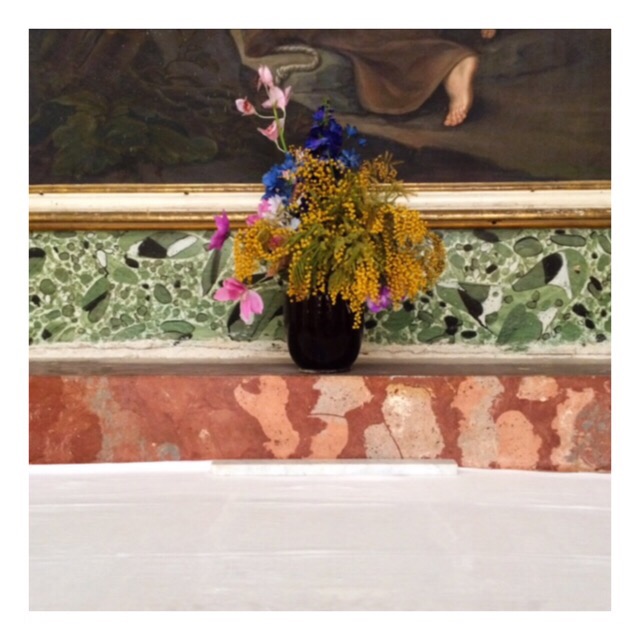 The edition is a photograph which Julie took whilst working on her forthcoming film ‘Ex-voto’, which is set in Umbria. She has been developing the film whilst based at the Mahler & LeWitt Studios. The film will premiere in Spoleto during the 2018 Festival di Spoleto and she explains its subject in the following paragraphs:

Set at the ‘Santuario di Santa Rita da Cascia’ in Umbria, the film Ex-voto will explore the nature of visions and spirituality. During my residency in 2016 I began researching this film, in particular the histories of female saints in the area. Amongst the many fascinating historical figures I discovered it was Santa Rita (1381-1457), a saint for ‘the impossible causes’, who fascinated me most. At the convent in Cascia, home of Santa Rita, I slowly became acquainted with the nuns who live there today. Little by little I was welcomed into their world, to witness the rituals of their day-to-day life.

In the convent I was shown a votive made by Yves Klein, which he had offered to Santa Rita shortly before he died. It had lain forgotten until many years later, when it was rediscovered after an earthquake in 1979. Klein’s connection to the monastery develops a second strand to my research, as I discover the history of Santa Rita I also retrace the story of Klein’s pilgrimage and the ex-voto object he left with the nuns.

In making this new work I was granted the most incredible privilege; permission to film within the cloisters, the first time in the convent’s history that such access had been granted. It is this footage, alongside re-enacted scenes from the saints life, carried out by pilgrims on her feast day in May 2017, that forms the basis of the film Ex-voto.

Julie Born Schwartz lives and works in Copenhagen. She studied at Goldsmiths and the Royal Academy Schools in London. In 2018 she will premiere her new film Ex-voto at the Festival di Spoleto. She also has a solo exhibition Galleri Image in Århus, Denmark. She has exhibited and had screenings across europe; for a full list and information about he work please visit her website. She is represented by Union Pacific, London. www.juliebornschwartz.com